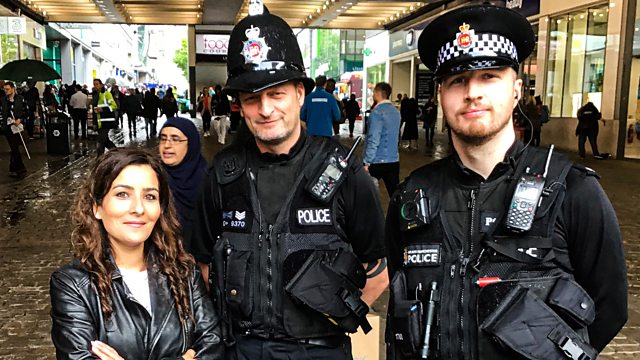 Law students from The University of Manchester are set to feature in a jury on a BBC series presented by two Manchester graduates, which will investigate how Britain’s courts are handling our law and order crisis.

In ‘Crime – Are We Tough Enough?’, Chris Daw QC and solicitor Ayesha Nayyar will be spending time with people working in the criminal justice system as well as those affected by it, either as victims or as individuals who have spent time in prisons.

Ayesha thinks the system should be prosecuting more, getting higher conviction rates and sending those found guilty to prison for longer – whereas Chris thinks we’re already doing all that, and it’s not working. He thinks we need to be sending less people to jail and for less time. Instead, he believes, the legal system needs to look at solutions that can keep people out of the courts in the first place – namely regulating drugs.

The series ends with Chris and Ayesha bringing all their evidence to ‘court’ – in fact, our Sackville Street Council Chamber - and presenting their arguments to a jury of 12 people, who have to decide whether we are too tough on crime, or not tough enough.

Chris graduated from Manchester in 1992, and his expertise spans the fields of criminal law, serious fraud, business regulation and professional discipline. Ranked as a Leading Silk in The Legal 500 and Chambers and Partners, Chris appears in many high profile cases, and advises companies and leading individuals in the worlds of sport, entertainment and business.

Ayesha graduated from Manchester in 1995. She is a renowned personal injury solicitor with 20 years of proven legal experience in the field, and is a director of award-winning law firm Nayyars Solicitors. She regularly contributes to newspapers and appear on TV talking about legal issues, including appearances as a guest speaker on BBC Breakfast, Sky News and BBC Two’s Victoria Derbyshire Show.

The students on the jury are Law with Politics student Gabriella Hartfield, who won the University Student Volunteer of the Year Award last year, Criminology student Alexandra Meek, who has volunteered with court based advice centre Manchester Free Legal Help, and recent LLB graduate Cian Hickey, who volunteered with our Legal Advice Centre and now works in our Justice Hub.

Whether you believe in harsher sentencing for criminals or radical reform to the justice process, this show is an in depth perspective into our current system and highlights the areas where we need change. I was honoured to meet so many amazing people during filming who have experienced our judicial system from all angles. Now, more than ever, I feel that we have an obligation to change our justice system to protect and improve tomorrow's community.

The series airs daily at 9.15am on BBC One this week, with the students appearing in the final instalment on Friday. It can also be viewed on BBC iPlayer.